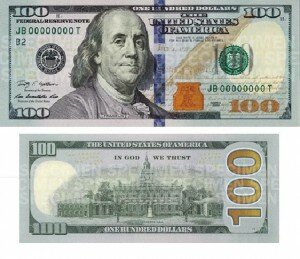 Sounds crazy right?  That is exactly what the US government is planning on doing with over 1 billion 100 dollar bills that were printed with a flaw.

As of now the enormous amount of useless cash is stored up in a vault in Texas.

So what went wrong?

Turns out the printing presses could not handle the sophistication of the new bills.  The new bills which were 10 years in the making had 3d imagery, a color shifting image of a bell and plenty more goodies to fool counterfeits.

Some of the bills creased during production causing a blank section on the bill.  Another issue is that there are bills that are printed correctly mixed in with the defunct bills.  Sorting these bills by hand would take an estimated 30 years!  A machine will be created to automatically sort the good and bad bills.  This will take a year.

So what does a “minor” mistake like this cost us tax payers?  120 million is what it cost to develop the bills, plus we can take on the machine and time it takes to sort the bills.

The quarantined bills, totaling $110 billion, add up to 10% of the US cash supply, which is $930 billion.  Production has begun on the old 100 dollar bills so there will be a reduced shortfall.