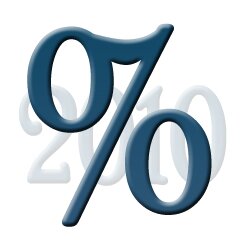 Lets take a look back at 2010 interest rates from January through December according to Primary Mortgage Market Survey.  We are going to use the 30 year fixed rate.  The 15 and 5/1 ARM trended similarly, although there are some subtle differences throughout the year.

We started the year out with higher rates then we would reach throughout the rest of the year save the second week in April where rates spiked shortly and then return downward.

April 8th we saw rates hit the high point of the year at 5.21%  After again holding right around 5% through mid May we started seeing the downward spiral which would take the 30 year fixed nearly under 4% in just a few short months.

September and October just continued the downward trend which lead into November when we say rates hit their lowest point.  On November 11th the 30 year fixed rate was 4.17%, the very day that marked the turn around for interest rates.

January to December 2010 was a wild year for rates and mortgages.  In an economy which many homes across the nation are worth less than that which is owed on them refinancing was a difficult or impossible thing to accomplish with many homeowners.  On the purchasing side of the coin things haven’t been much better than this in decades.  Low interest rates and bottomed out house prices means many people got great deals in 2010 on the home they are now living in.