BofA To Impose Credit Card Annual Fees By Next Year 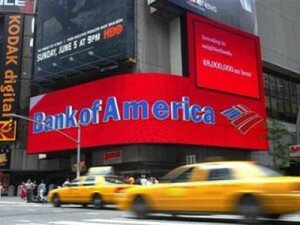 Even though new credit card reforms are sweeping the industry, which is scheduled to go into effect as early as December 1st, Bank of America customers have not yet seen the last of the credit card fees and charges that are costing them their hard earned dollars.

According to BofA spokesperson Betty Reiss, the annual fees would range from $29 to $99, and the proposed fee would initially affect about 1% of the bank’s credit card customers. “We’re testing this to see what the feedback is. In terms of any plans going forward, we haven’t made any decisions yet,” said Reiss.

Bank of America is one of the largest credit card companies in the country with about 80.2 million cards issued and in circulation. BofA is third only to Chase with 119.4 million cards and Citibanks with 92 million cards.

So who will be affected by the annual credit card fees? The customers that could be the first affected are being selected based on their risk and profitability, which means, those cardholders who are in good standing, never pay late and almost never get charged with interest fees could be the first ones hit by the new annual fees. I guess it does not pay to be a good customer anymore, or you have to pay because you are a good customer.

Customer complaints of the steep interest rate hikes and the sudden cut in credit card limits prompted congress to take action against some banks’ practices. The new credit card consumer protection laws include how and when a bank or credit card company can raise interest rates and fees, the reason why banks are changing their policies now, before the law takes effect, as early as December 1st of this year.

Bank of America states that their decision to charge the additional annual fee is “in response to market changes, new federal laws and regulations, and the increasing cost of providing unsecure credit.” If a customer is affected by the new changes and is required to pay the annual fee, they will have the option to reject it, but by rejecting the fee the card company can have their account closed.
Does this sound fair? I know when I get those new terms I’m rejecting it as I have a credit card from Bank of America and would fall under the ‘good customer’ category.