Visa Sponsors the Olympics for Another 10 Years 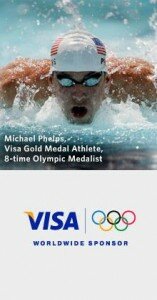 Visa Remains the Sole Credit Card Sponsor for the Olympics

With the 2010 Winter Olympics in Vancouver just over the horizon, Visa has decided to extend its contract with the Olympic Games through 2020.

Since 1986 visa has been an official sponsor of the Olympic Games. This will continue at least through 2020.

This means Visa has sponsored the Olympics through some of the greatest games ever.

Visa will continue to sponsor the Olympics through what are guaranteed to be another great decade of the games. Including Olympic Games in

Stretching beyond just sponsoring the Olympic games Visa sponsors many Olympic and Paralympic athletes.  Visa has provided funding and financial support to help athletes reach their full potential during the games and more importantly during their normal lives.

By using your Visa card you are helping support and sponsor team USA for the Olympic Games.  Team USA is in no way financially supported by our government, meaning sponsors like Visa and others help fund team USA’s efforts.

Good Luck to Team USA and Visa in the 2010 Olympics in Vancouver, Canada.