The Worst Is Over – Mortgage Rates Going Up 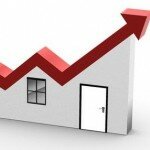 After almost a year of economic crisis in the housing and real estate markets, it looks like the worst is finally over. The nation’s top housing officials have declared that the housing price slump is finally coming to an end, and it looks like mortgage rates will be going up this week.

The latest survey of mortgage rates from top banks have shown that all types of mortgages are going up. 30 year fixed mortgages now have an interest rate of 4.79 percent, which is higher by 8 points from last week. The 15 year fixed rate home mortgage also showed a rise with 3.9 percent compared to a 3.86 percent rate last week. Jumbo mortgage rates also went up by 6 points, coming from 5.21 percent to 5.27 percent.

Even adjustable rate mortgages are not left out with this upward swing. The 5/1 ARM went up to 3.49 percent, an increase of 4 basis points.

The secretary of the US Department of Housing and Urban Development also stated that “it’s very unlikely that we will see a significant further decline” with regards to home prices, as stated in n interview in CNN’s State of the Union show.

Although prices are steadily rising in the real estate market, it is still yet to be seen whether the rise will be significant enough to be considered as a strong recovery. The National Association of Realtors also mentioned that there are now more pending contracts to buy existing homes. The number would even be greater if banks and other lending institutions would return to their normal standards, and allow credit worthy individuals to take on a loan.

So what does this mean to all of us? First of all, home and other property owners will now begin to see the light with regards to their biggest investment. And they can rejoice for the predicted increase in value of their homes. On the other hand, new home buyers will also be faced with higher mortgage rates and increasing prices of properties. This can only mean one thing, if you want to buy a property, now would be the best time to do it. It may take a while for the market to recover, but it’s already on it’s way there. Better start while you’re still ahead.