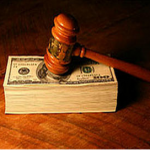 The economy is still on a downfall after analysts wrongly predicted a rise in the market. Aside from affecting the stock and housing markets, the bleak economy is of course, affecting employment. This could be one of the worst situations new graduates are being faced with. Unemployment rates are now standing at a 14.5%. And to top it all off, not only will graduates be worrying about not getting a salary, but they will also be faced with a mountain of debt – student debt.

It is a very real situation that graduates come out of college with as much as $100,000 in debt. This makes them feel as if they’re on a home mortgage, without even owning a house.

One graduate regrets taking on student loans without reading the fine print. She had taken two loans, a private one, and a government funded one with about the same loan amount. The government student loan had flexible terms, however the private loan came with non-negotiable and expensive repayment terms. Her government loan only costs her $160 per month now, but her private loan costs as much as $800 per month. With the growing demands of daily life plus a complicated pregnancy, she found her student debts too much to handle. She was advised to file for bankruptcy, only to find out that under the law, student loans cannot be discharged, unlike mortgages, credit debt, and even gambling debt.

This development should make students even more wary and vigilant when it comes to taking out student loans. As much as possible, it’s best to apply for a government student loan such as Stafford loans, since the terms are more negotiable and forgiving.

Student Loans: How Much Is Too Much? 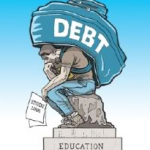 According to financial guru, Robert Kiyosaki, debts that don’t earn you money are considered as liabilities. Now what about student loans? Obviously, these loans are made so that students can graduate with a degree, get a stable job with benefits, and earn good money. So in a way, student loans shouldn’t be a liability right?

The problem now is, what if your student loan is bigger than your yearly salary? Then you’ll have to end up paying for your student loan long after you graduate. A liability? Sure sounds like it. This is where the question of “how much is too much?” comes into play.

There are definitely instances when both students and parents are careless when taking up student loans. The belief goes like this: “As long as the student can go to a good college, he will be able to pay off the loan anyway when he gets that good job.” The problem with this belief is, there’s a lot left to speculation. So how can we ensure that the loan amount we get can be realistically paid off within the first few years on the job?

Well, there’s really no insurance. But there is a recommended amount that your student loan would be better off not exceeding. Finaid.org reports that the average student loan in 2008 was $23,000. Aside from that, Sallie Mae also reports that students usually have a credit card debt of about $4,000. That amounts to $27,000 which most students cannot earn during their first year of working.

It’s advised not to go over the maximum amount permitted under the Stafford loan program, which incidentally is also $27,000. Also, it’s best to remember that if there really is no need to take on a loan that goes up to the maximum, it’s much better not to.

The Stafford loan breakdown is as follows:

If you can take on a loan that is less than that, then, the better. It is also advised that the amount of student loan taken should not exceed the projected salary of the student during his first year of working. Now that the figures have been laid on the table, it’s easier to realize whether that less expensive school would be a better option. Although expensive education can give more quality, it also pays to be realistic.

3 Steps To Getting Rid of That Student Loan 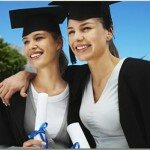 Finally, you’re fresh out of college and excited to start a new chapter in your life. But before you completely immerse yourself into finding a job and making it big, there’s just one little thing that needs attention. Your student loan.

Ok, so maybe student loans aren’t a little thing at all. In fact, it has now only dawned upon you that you’ve reached the time where you won’t be getting any money out of the loan, but instead you will need to find money to pay it off! Before your grace period ends, here’s what you can do to get your student loan in order. Oh and by the way, playing it dumb just won’t get you off the hook.

1. Find out how much you owe – This is certainly the first step you can take to paying it off. You have to know just how much you owe after all these years. You can do this by digging through your old boxes and folders, or by asking your parents if they still have those papers you signed in the beginning. If you’re not a very organized person, log on to National Student Loan Data System where you can see your student loans. Also, you can contact your university’s financial aid office, they can help you sort things out.

2. Choose a Repayment Plan – There are several ways for you to repay your plan. One is standard repayment. With this plan you are expected to pay a set amount to your lender every month, with up to 10 years to pay off your loan. Standard repayments usually require you to pay more than other repayment options, but this will also get you out of the loan quickly. Extended repayment plans still demand a set amount every month, but the term can be extended for as long as 12 to 30 years. Then again, interest will also rise. For graduated repayments, your payment method will start small but then build up to larger monthly payments. Although it may seem like a good choice at first, you can end up paying 1.5 times more than the original amount.

3. Find Other Ways to Lower the Amount - As the saying goes, everything can be negotiated. Although your student loan amount may be hard to budge, original and administrative fees may be easier to waive. Negotiate with a customer service representative what you can do to help make the burden easier. Maybe something as simple as paying online can help reduce your costs.

The sooner you clear yourself off the student loan, the better for you. The thing is, loans don’t only stop with education. You can eventually find yourself applying for a car loan, or a home mortgage, getting you stuck in the rat race faster than you can say cheese. So start being financially responsible as soon as you graduate. Smart decisions early on can help you live a better life in the future.

Student Loan Consolidation: Should You Do It? 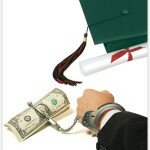 Going to college can mean various expenses. Aside from the tuition fees, there’s the stay, food, car, and other miscellaneous expenses. Because of all this, students are forced to take on other types of loans and may even take on credit cards as well. Sometimes, the number of payments students have to make may cause confusion and may prove to be too heavy. This is when student loan consolidation comes in.

Loan consolidation is when several individual loans are merged to become one large loan. The overall result is a lower monthly payment and the obligation to pay only one entity, making it easier to track down your creditors and balances.

Is Student Loan Consolidation For You?

Despite the clear advantage of having to pay off only one creditor, it is important to delve deeper whether you really need to consolidate those loans. Despite the obvious advantages, there are some downsides to it. One disadvantage of student loan consolidation is that you lose any borrower’s benefits that you may have had with an individual loan. These benefits could come in the form of rebates or interest rate discounts. Discharge benefits will also be lost. The chance of loan cancellation will also be lost once the individual loans are consolidated. If you have availed of too many plans, you will no longer have the option of canceling one loan, forcing you to pay off everything.

One clear disadvantage is also when you choose to go for the longer term. Although your monthly payments may have decreased significantly and you can breathe easy for now, this may not be the case in the future. If you calculate all your accumulated expenses throughout the years, you may realize that you ended up paying even double the original amount because of the consolidation.

Student loan consolidation does have its highlights, but it also has some major points that need to be given adequate thought. Should you choose to go for it, bear in mind that you can choose between fixed and variable rates. Also, look thoroughly at the options. There are some that give you a penalty for pre-payments. Never go for those.

Before making a decision to consolidate your loans, make sure to weigh in the pros and cons. Maybe all you need is some organization and financial management to get your finances in order. If that’s the case, you may be better off not consolidating.

Scrambling for a Student Loan? Get It at the Last Minute 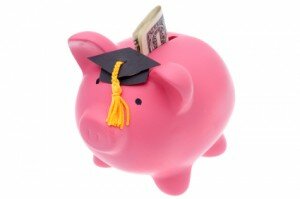 If you’re a student who’s facing the possibility of not being able to enter college next semester, here are a few solutions you can find – at the last minute.

Finally, if you’ve followed all the steps enumerated above but you still can’t seem to make ends meet, it’s time to recheck your college plan. Try to see where you can cut expenses and if you can work more hours to gain extra cash. Save with the small stuff and you might just be able to pull through.

Being Wise with College Credit Cards 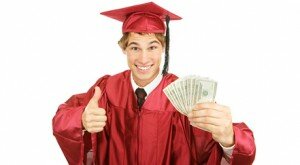 In the past credit card companies have been able to set up booths around colleges and universities nationwide and offer free giveaways to those who are willing to sign up for a credit card.

This is much like you see at a Major League Baseball game or at the county fair.

“Sign up today and we’ll give you a shirt.” (or some other piece of junk you do not need.)

The act means that credit card companies, if marketing on campus, cannot offer free goods.  It also requires consumers ages 18-21 to prove they earn enough to pay the credit card bill, or be force to have a co-signer.

The issue is that students are not paying their credit card balances.  According to Sallie Mae 82% of students did not pay their monthly balances in 2009. This lead to seniors graduating with an average of $4,100 in credit card debt.

So if you are a college student here are some tips for finding the best credit cards.

Be wise about picking out the right credit card.  Credit cards can benefit your or hurt you so do your research and make good decisions.

BankAim is your source for everything Banking.

We have the best banking information including:

Thanks for stopping by.