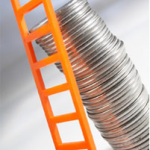 One of the best things that a portfolio in certificates of deposit can do for you is that it keeps your money fairly safe in times of economic turmoil. Savvy investors may have a portion of their money invested in high return avenues such as stocks, but they also keep an amount in stable ventures like CD’s. However, investing in certificates of deposits isn’t just about placing a bulk of money into one term. Just like dollar cost averaging in the stock market, there’s also a strategy that can help you get more from your CD’s.

One characteristic of a CD is that once you invest in a rate, it stays the same for the length of the term you opted in for. Sometimes the economy can be in a slump and it would be a waste to be stuck in a large CD investment with a low rate. “Laddering” CD’s can help investors beat lengthy low-rate cycles by spreading their money over different terms while keeping some liquidity.

Once the 1 year CD has matured, the investor can then reinvest this amount into the “vacant” rung which is the five year rung since the previous five year rung has now elapsed for a year. Every year, the farthest rung is constantly the term that is being replenished, and since it is a given that the longest term has the highest interest rates, your money would always be invested in the highest term rate.

One of the things that you have to remember when employing the laddering strategy is that your maturities should complement your cash needs. Better yet, invest only the amount of money you can afford to put in without fear of getting into a cash crunch. There is no use in investing for the long term when you will find yourself in need of money right in the middle of a term.

It is possible to invest in a shorter ladder. For example, if you choose to invest in a 1 year ladder, you can place your money in shorter rungs such as 3 month, 6 month, 9 month and 12 month rungs. Whatever your choice may be, laddering can certainly help you beat low interest rates in the long run without having to keep watching the rates.